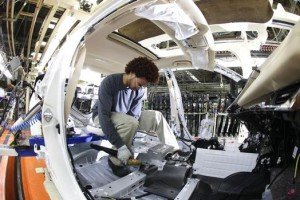 Two of the most American-made cars driving out of Kentucky

The Toyota Camry and the Chevrolet Corvette have claimed the No. 1 and No. 7 spots, respectively, in the annual Cars.com American-Made Index.

This marks Toyota’s return to the American-Made pinnacle for the first time in three years and the fifth time overall that Camry has been ranked No. 1 on the index.

According to Cars.com, the “American-Made Index rates vehicles built and bought in the United States. Factors include the percentage of parts considered ‘domestic’ under federal regulations, whether the car is assembled in the U.S., and U.S. sales. Models with domestic-parts content ratings below 75 percent are disqualified, as well as models built exclusively outside the U.S. or models soon to be discontinued without a U.S.-built successor.”

The Toyota Camry, America’s best-selling car for 13 consecutive years, comes out of Toyota Motor Manufacturing, Kentucky, Inc. (TMMK) in Georgetown, Ky. alongside the Camry Hybrid, Avalon and Avalon Hybrid. TMMK is Toyota’s largest manufacturing facility in North America, which also builds engines and employs more than 7,500. The plant built its 10-millionth vehicle in 2014 and will begin adding the Lexus ES to its lines this fall – the first Lexus to be manufactured in the United States. The addition of Lexus is the hallmark of a $360 million investment in the plant that also adds 750 new jobs.

Read more: Two of the most American-made cars driving out of Kentucky