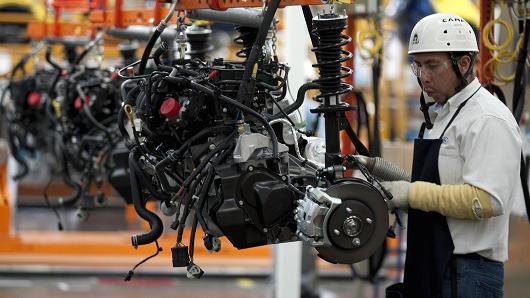 Before Donald Trump takes to the debate stage Wednesday night for one last chance to prove U.S. trade policy is letting Mexico steal Michigan and Ohio’s auto jobs, he might want to do some research on manufacturing trends in the global auto industry.

Mexico’s biggest and fastest-growing carmakers aren’t American brands like Ford and General Motors’ Chevy. The biggest Mexican carmaker is Nissan, and the newest plants belong to Audi and Kia, with big BMW and Toyota plants in the pipeline.

For a candidate who argues that free trade has led to the hollowing-out of U.S. manufacturing, the most ironic cut may be that car companies are building in Mexico rather than the United States, largely because it has freer trade than the United States does with the rest of the world. Critics of the North American Free Trade Agreement, who are placing all the blame on it, are denying the reality of global auto manufacturing.

“That’s what gets lost in the narrative,” said Bernard Swiecki, director of the automotive communities partnership at the Center for Automotive Research in Ann Arbor, Michigan. “Free trade agreements are driving BMW and Audi, but they’re not free trade agreements with us. Blame NAFTA all you want — it wasn’t the trade agreement that made that happen.”