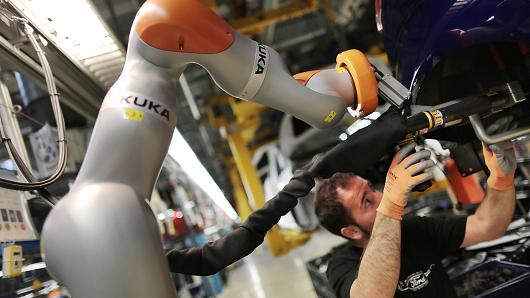 Man and machine: The new collaborative workplace of the future

At Ford’s factory in Cologne, Germany, a new kind of robot is sitting by the assembly line helping manufacture the legendary automaker’s cars. But these collaborative robots, or co-bots, aren’t replacing their human counterparts at this Ford Fiesta plant. Instead, they’re working side by side with 4,000 Ford factory workers, and not for them.

“The workforce is really helping us define how they can contribute more by using the collaborative robots to do some of the more mundane, simple, heavy-exertion tasks, which in turn allows them to use more of their creativity and their minds to take us to the next level, ” said Bruce Hettle, vice president of manufacturing and labor affairs at Ford.

For decades the auto industry has led the way in using robots in their factories, a trend that continues today. According to the Robotic Industries Association, North American automotive companies have already spent $282 million on robots in 2016, after having spent a combined $436 million on robots the previous year. These robots are the traditional industrial robots, colossal machines that pose a safety risk to humans and therefore need to be fenced in to protect workers as they complete their tasks.

“Upwards of 1,000 robots can be found in a modern [auto] assembly plant,” said Jay Baron, CEO of the Center for Automotive Research. These machines do things like attach doors, apply paint and load engines. “Without this automation, our factories would have been obsolete a long time ago. Automation is necessary for safety, quality and productivity.”

Read more: Man and machine: The new collaborative workplace of the future