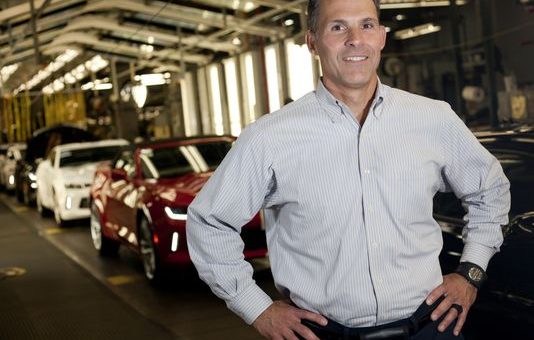 LANSING – Every Sunday night, Steve Notar Donato bids farewell to his wife and two kids in Hudson, Ohio, and makes a nearly four-hour drive to a hotel in Okemos that he calls home five days a week.

Before sunrise each Monday, he reports to work at General Motor’s Lansing Grand River Assembly plant. For the six weeks he’s been on the job, Lansing Grand River’s new general manager said he’s been spending his time on the floor to “get to know the people, the product and the process.”

Notar Donato has moved nine times in his 30-year career at GM, and this isn’t his first stint in Lansing. His family is used to him living out of hotel rooms for months at a time. He makes the commute because of his passion for his job but also so he doesn’t have to uproot his children from their schools and social lives.

“My daughter (Leah) is going to be a senior at Hudson next year, so I’m not wanting to be the dad that’s hated for the rest of her life,” he said with a laugh. “I already moved her halfway through high school. We’re going to move next year after she graduates.”

His son, Andrew, is a freshmen at Ohio State University and “can care less where we live,” Notar Donato added. “My kids have been very resilient and understand what dad does and appreciate what I go through.”

Before he started the job on June 1, he spent two years as plant manager at GM’s Lordstown Complex near Youngstown, Ohio. For the first eight months of that job, he stayed in a hotel and made weekend visits to his family, who were still living near Indianapolis, where they had moved five years earlier when he became the manager at GM’s Marion Metal Plant.